The 9 Best Omelets in Idaho! 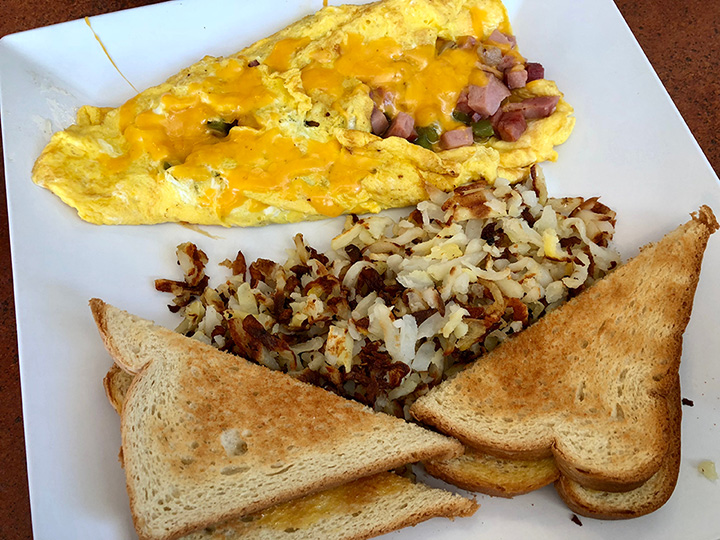 In Idaho, you don’t mess around with breakfast. That’s why it’s important to know where and when to get the very best breakfast the Gem State has to offer. Below, you’ll find 9 of the best places to get yourself a down-home Idaho omelet that will have you singing the chef’s praises to anyone that’ll listen!

Smitty’s Pancake and Steak House in Idaho Falls, Idaho, is your one-stop-shop for all-American, large-portioned breakfasts. Omelets take up a sizeable portion of their breakfast menu. Each Smitty omelet is made with three eggs and comes with your choice of three pancakes or hash browns plus toast. If you’re watching your carbs, you can choose tomato slices, green salad, or cottage cheese instead. Choose from one of four different omelets, including the Country Chef, Chill and Cheese, Everything, and Denver Cheese, or make your own from a plethora of add-ons.

Joe, the owner of Moe Joe’s, wants his restaurant “to be known as the best breakfast and lunch eatery in the Treasure Valley.” To those ends, all of Moe’s meals are hand-crafted. His one rule: no microwaves allowed. All omelets at Joe’s are make-your-own, and come with three eggs plus potatoes or hash browns and toast. Add three items from an extensive list of veggies, meats, cheeses, and house made sauces to cater your omelet exactly to your taste.

Joe Momma’s Breakfast Eatery in Eagle, Idaho, cooks up home-style food, including omelets, benedicts, burgers, sandwiches, and daily specials. All omelets come with your choice of hash browns or potatoes plus your choice of toast, French toast, a pancake, or a biscuit. Egg whites are available, too. The five omelets on the menu include the Denver, Green Eggs and Ham, Big Veggie, Momma’s Favorite, and the Kitchen Sink, which includes ham, bacon, onions mushrooms, green bell peppers, and potatoes covered in cheddar cheese and house made gravy. Don’t like those options? Make-your-own omelets are included, too.

The Breakfast Club in Moscow, Idaho, is first-come, first-serve, which is important because of how popular they are, especially for their melt-in-your-mouth-omelets. Each omelet is served with home-style hash browns and toast or huckleberry zucchini bread, or two buttermilk pancakes. Choose from the garden, three-meat, Verde, Denver, Greek, tomato/basil, or ultimate vegetarian options, or create your own. They’re all delicious, but we recommend trying the tomato/basil, which includes spinach, tomato, bacon, mushroom and melted cheese in a sundried tomato-basil shell.

The Egg Factory Café has three locations, two in Boise and one in Nampa, Idaho. Their motto is simple: cook fresh food to order with the best ingredients possible. Their stuffed omelets are decadent delights. Each omelet comes with a whopping four eggs, served with potatoes or hash browns and your choice of bread. If you’re feeling up to a challenge, go for the Whole Farm Omelet, which comes with cheddar, Monterey jack, crumbled bacon, diced ham, country sausage, mushrooms, onions, and bell peppers, topped off with more cheese. If you’re feeling spicy, the Taco Omelet, complete with jalapeños, might be for you.

The Black Bear Diner is one of the more popular chain restaurants on the West Coast. Idaho hosts three locations: one in Chubbuck, one in Boise, and one in Idaho Falls. All omelets are served with three eggs, your choice of hash browns, country red potatoes, or fresh fruit with a housemaid biscuit. Choose from five different omelets. Our favorite? Joe’s Hobo omelet, made with ham, link sausage, thick-cut smoked back, jack cheese, cheddar cheese, spinach, and onion.

The Garnet Café in Coeur d’Alene, Idaho, offers the best in farm-to-table gourmet breakfast. The owners also operate the close-by McLane Farms, where most of their ingredients come from. Their omelets are made from three eggs served with northwest potatoes and choice of bread. Egg whites and stir-fry are available options, too. Nine different omelets are available, including the delicious Northwest (Smoked Salmon, zucchini, onions, tomatoes, and herbed goat cheese). You can also build your own and choose from ingredients like duck confit and crab. For an upper-end omelet, stop by The Garnet Café.

The Provision Kitchen in Driggs, Idaho has a warm, casual atmosphere that reflects the residents of the Teton Valley where it exists. The Provision Kitchen received the 2016 Certificate of Excellence from Trip Advisor. Breakfast is served daily from 7 AM until 2 PM. The omelets are prepared with three eggs and served with hand cut home fries and toast. Choose from the Mexican, American, Greek, or Denver omelets, or make your own by adding veggies, meat, and cheese.