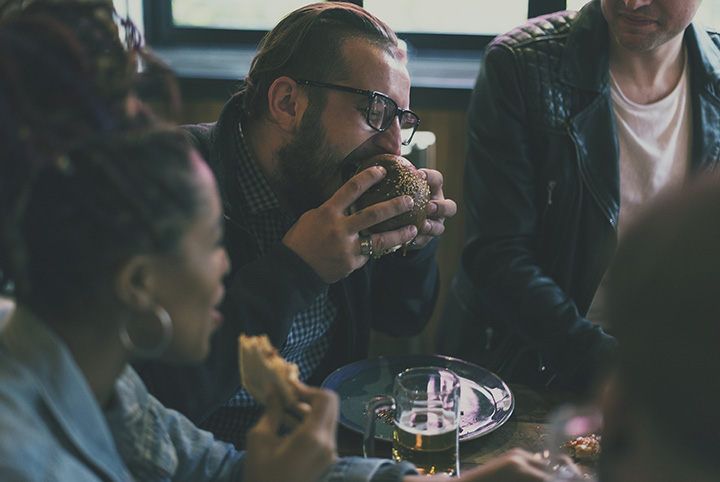 So, you’re up late cramming for that big exam and your stomach starts rumbling. Most of the nearby restaurants closed hours ago, what do you do? The University of Idaho area in Moscow boasts an abundance of late-night food establishments to satisfy all types of cravings. Check out our favorites.

Moscow Bagel and Deli hardly ever closes—they’re open from 7 a.m. until 3 a.m. That means you never have to go for very long without your bagel fix. Order online or come in for over fifty unique bagel creations, giant cookies, chips, and more.

Shari’s Café and Pies is open every day of the year, 24/7. No matter what time you come in, you’re sure to find American favorites and homemade pies.

The roving Grub Truck is open Wednesday and Thursday until 2:30 a.m., and Friday and Saturday until 3 a.m. You can usually find it near the Garden Lounge in downtown Moscow serving up mac-n-cheese, tacos, burgers, and more.

Named as one of the best sports bars in America by Sports Illustrated, the Corner Club is one of Moscow’s late-night staples. Visitors can look forward to free popcorn and bar snacks.

it shall never die ðŸ’—

Mingles Bar and Grill has fantastic bar food and is open most nights until 2 a.m. Their menu is extensive and includes appetizers, burgers, chicken tenders, clam strips, salads, and much more.

John’s Alley Tavern in Moscow, Idaho, is known mostly for hosting frequent live music, but when you’re struck with the late-night munchies, it’s a fine choice for food, too. Keep in mind that John’s Alley is mostly a bar, though, so you’ll be looking at bar fare.

WinCo Foods is a 24/7 grocery store that sells all kinds of ready-made dishes, as well as regular groceries. They sell discounted groceries and have a deli and bakery for good cheap eats.

Bucer’s Coffeehouse Pub roasts their own coffee, even late. In addition to coffee, they sell muffins, cinnamon rolls, scones, paninis, desserts, and more.